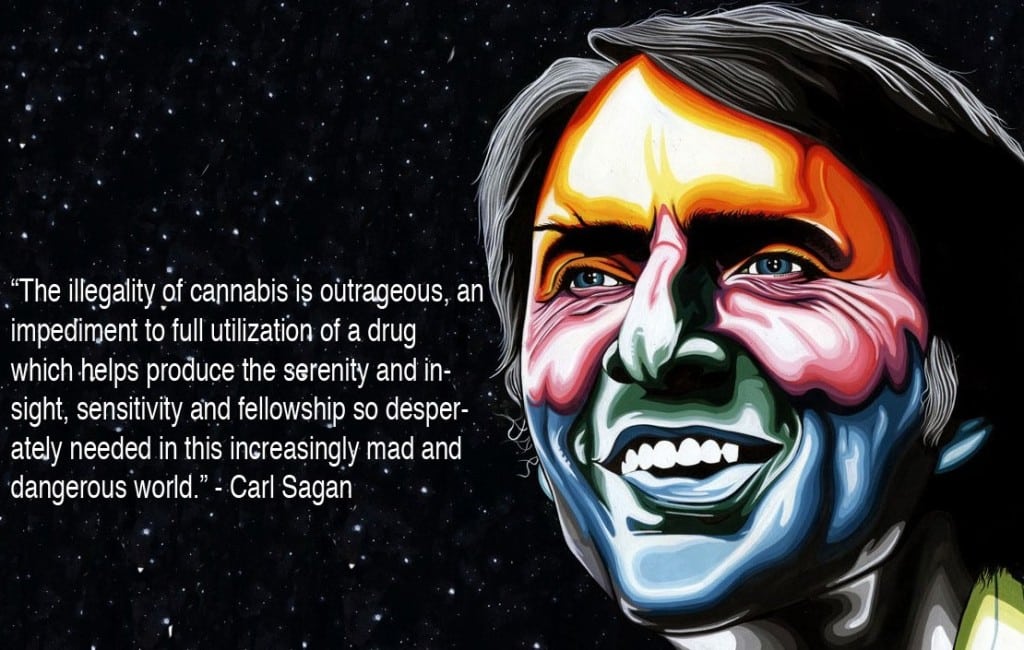 Our favorite excerpts from

Much like today, it wasn’t super acceptable for community leaders to come out as proponents for cannabis when Carl Sagan was bouncing around. So when Sagan had something to say he said it under the pseudonym, Mr. X.  Here are some of our favorite excerpts from that something he said.

“This account was written in 1969 for publication in Marihuana Reconsidered (1971). Sagan was in his mid-thirties at that time. He continued to use cannabis for the rest of his life.”

1.  I had become friendly with a group of people who occasionally smoked cannabis, irregularly, but with evident pleasure. Initially I was unwilling to partake, but the apparent euphoria that cannabis produced and the fact that there was no physiological addiction to the plant eventually persuaded me to try.

2. My initial experiences were entirely disappointing; there was no effect at all, and I began to entertain a variety of hypotheses about cannabis being a placebo which worked by expectation and hyperventilation rather than by chemistry.

3.  After about five or six unsuccessful attempts, however, it happened. I was lying on my back in a friend’s living room idly examining the pattern of shadows on the ceiling cast by a potted plant (not cannabis!). I suddenly realized that I was examining an intricately detailed miniature Volkswagen, distinctly outlined by the shadows. I was very skeptical at thisperception, and tried to find inconsistencies between Volkswagens and what I viewed on the ceiling. But it was all there, down to hubcaps, license plate, chrome, and even the small handle used for opening the trunk. 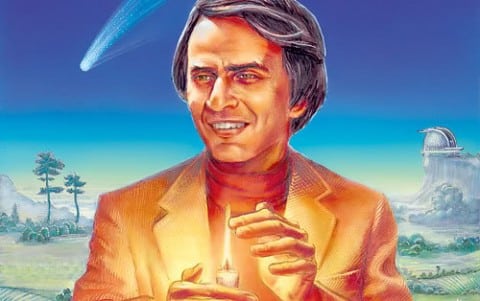 5. I can remember another early visual experience with cannabis, in which I viewed a candle flame and discovered in the heart of the flame, standing with magnificent indifference, the black-hatted and -cloaked Spanish gentleman who appears on the label of the Sandeman sherry bottle.

6. Looking at fires when high, by the way, especially through one of those prism kaleidoscopes which image their surroundings, is an extraordinarily moving and beautiful experience.

7. The cannabis experience has greatly improved my appreciation for art, a subject which I had never much appreciated before.

8. There also have been some art-related insights … For example, I have spent some time high looking at the work of the Belgian surrealist YvesTanguey. Some years later, I emerged from a long swim in the Caribbean and sank exhausted onto a beach formed from the erosion of a nearby coral reef. In idly examining the arcuate pastel-colored coral fragments which made up the beach, I saw before me a vastTanguey painting. PerhapsTanguey visited such a beach in his childhood.

9. Improvement in my appreciation of music has occurred with cannabis. For the first time I have been able to hear the separate parts of a three-part harmony and the richness of the counterpoint. I have since discovered that professional musicians can quite easily keep many separate parts going simultaneously in their heads, but this was the first time for me.

10. The enjoyment of food is amplified; tastes and aromas emerge that for some reason we ordinarily seem to be too busy to notice. I am able to give my full attention to the sensation. A potato will have a texture, a body, and taste like that of other potatoes, but much more so.

11. Cannabis also enhances the enjoyment of sex –on the one hand it gives an exquisite sensitivity, but on the other hand it postpones orgasm: in part by distracting me with the profusion of image passing before my eyes. The actual duration of orgasm seems to lengthen greatly, but this may be the usual experience of time expansion which comes with cannabis smoking.

12. I do not consider myself a religious person in the usual sense, but there is a religious aspect to some highs. The heightened sensitivity in all areas gives me a feeling of communion with my surroundings, both animate and inanimate. 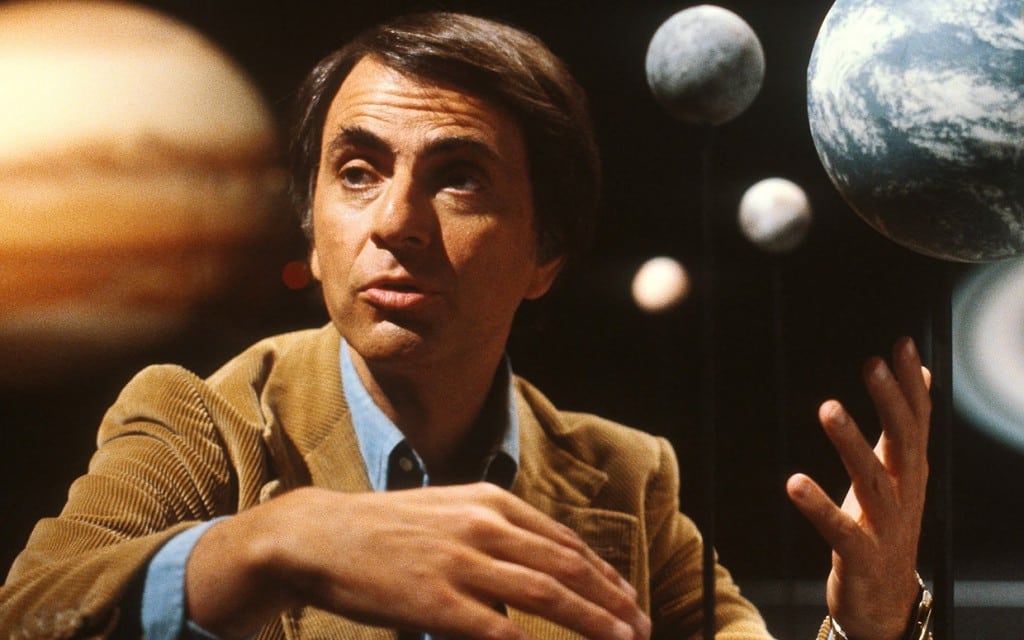 13. Cannabis brings us an awareness that we spend a lifetime being trained to overlook and forget and put out of our minds.

14. When high on cannabis I discovered that there’s somebody inside in those people we call mad.

15. When I’m high I can penetrate into the past, recall childhood memories, friends, relatives, playthings, streets, smells, sounds, and tastes from a vanished era. I can reconstruct the actual occurrences in childhood events only half understood at the time.

16. Many but not all my cannabis trips have somewhere in them a symbolism significant to me which I won’t attempt to describe here, a kind of mandala embossed on the high.

17. There is a myth about such highs: the user has an illusion of great insight, but it does not survive scrutiny in the morning. I am convinced that this is an error, and that the devastating insights achieved when high are real insights; the main problem is putting these insights in a form acceptable to the quite different self that we are when we’re down the next day.

18. I can remember one occasion, taking a shower with my wife while high, in which I had an idea on the origins and invalidities of racism in terms of gaussian distribution curves. It was a point obvious in a way, but rarely talked about. I drew the curves in soap on the shower wall, and went to write the idea down. One idea led to another, and at the end of about an hour of extremely hard work I found I had written eleven short essays on a wide range of social, political, philosophical, and human biological topics.

19. If I find in the morning a message from myself the night before informing me that there is a world around us which we barely sense, or that we can become one with the universe, or even that certain politicians are desperately frightened men, I may tend to disbelieve; but when I’m high I know about this disbelief. 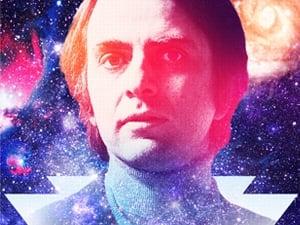 21. Cannabis enables nonmusicians to know a little about what it is like to be a musician, and nonartists to grasp the joys of art.I have on a few occasions been forced to drive in heavy traffic when high. I’ve negotiated it with no difficult at all, though I did have some thoughts about the marvelous cherry-red color of traffic lights. I find that after the drive I’m not high at all.

22. I have on a few occasions been forced to drive in heavy traffic when high. I’ve negotiated it with no difficult at all, though I did have some thoughts about the marvelous cherry-red color of traffic lights. I find that after the drive I’m not high at all.If you’re high and your child is calling, you can respond about as capably as you usually do.

23. If you’re high and your child is calling, you can respond about as capably as you usually do.

24. ..I don’t advocate driving when high on cannabis, but I can tell you from personal experience that it certainly can be done.

25. My high is always reflective, peaceable, intellectually exciting, and sociable, unlike most alcohol highs, and there is never a hangover. Through theyears I find that slightly smaller amounts of cannabis suffice to produce the same degree of high.

26. The illegality of cannabis is outrageous, an impediment to full utilization of a drug which helps produce the serenity and insight, sensitivity and fellowship so desperately needed in this increasingly mad and dangerous world.