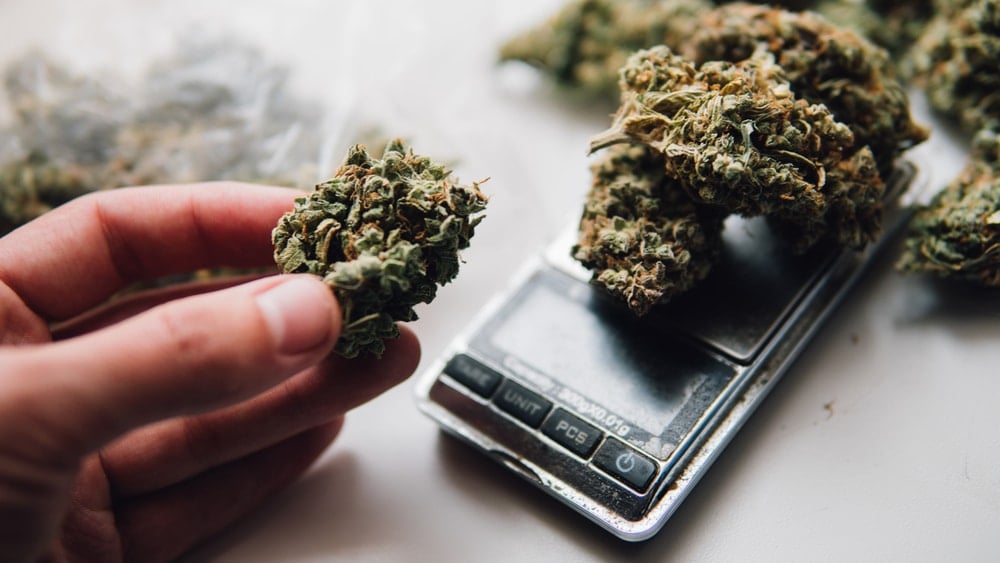 If you’re just venturing into the world of cannabis you are probably a little bit surprised by just how much math is involved in the process. Even the best marijuana strains are generally measured within the context of an ounce.

Of course, you can purchase marijuana in smaller increments, via a gram at a time, or you can purchase in bulk. For example, an eighth (one eight of an ounce, 3.5 grams) usually costs significantly less than buying three grams of marijuana separately.

Naturally, larger quantities of cannabis are possible but once you push past an ounce buying marijuana it becomes both cost prohibitive, and in many states, illegal.

As of now, most state with marijuana legalization allows up to one ounce of marijuana on hand.

That’s a precursory glance at the world of cannabis and the typical weights that come along with purchasing weed. Today we dive deep into the world of marijuana measurements. Read on, won’t you?

The gram is your base unit of measurement when it comes to buying marijuana. A single gram is enough for a few joints (depending on how you roll) or one or two moderate blunts.

How much weight is a gram of weed?

A gram is the smallest weight of marijuana you can buy and it doesn’t weigh much of anything. To put this into context, a gram is one twenty-eighth of an ounce (1/28). One gram will easily fit into the palm of your hand.

The world of cannabis is filled with jargon and slang terms. There is a whole language relating to marijuana out there that, while not necessary to understand, can help you a little bit especially as you go about trying to purchase your own flower.

One of the most common nicknames for a gram of cannabis is “dime bag”.

What is a dime bag?

A dime bag is usually the smallest increment of marijuana that you can purchase. As mentioned earlier, it’s standardized as a gram of marijuana. However, if you’ve ever found yourself buying cannabis in a not so legal setting, you probably know that people mean different things when they say dime bag.

Sometimes it’s just a regional thing—different areas of the country have their own terms but many use this common name for whatever the smallest increment of marijuana is available for purchase.

How much is a dime bag?

So how much is a dime bag? Traditionally, it has always been a gram of bud for $10 because across the country $10 a gram is the going rate if you only buy one gram at a time. Thus the name dime bag.

However, it’s really not nearly so regimented as that. Like any other product, the market value of cannabis is subject to frequent change. How much you pay for a dime bag will depend on lots of different factors such as your location.

How much does a gram cost in Colorado and California

The price of cannabis is actually on the decline right now, as the supply has become greater than the demand in states like Colorado and California.

However, cannabis is priced differently depending on the potency and you can expect a typical gram, with tax (and there is a lot of tax) to come out to around $12-20 in most legal states.

Dub of Bud | 2 Grams of Marijuana

Now, let’s talk about dub sacks. To some people, dime bags and dubs are more or less interchangeable, but broadly speaking, the industry standard does distinguish the two. Let’s take a look, shall we?

How many grams are in a dub?

Traditionally, a dub sack is two grams of marijuana.

The actual quantities may vary depending on where in the world you find yourself but that’s pretty much the standard.

How much is a dub?

The price of a dub is often refer to as any $20 bag of marijuana—the actual quantity that you receive thus depending on the market value of cannabis in your region.

So you can just think of a dub as a blanket term for any $20 bag of kush. However, presuming that we are talking about your standard two-gram bag, in other parts of the country you can expect to pay somewhere in the neighborhood of $30 on average.

Some places this figure will be more, others less. Tax figures heavily on the price of legal recreational cannabis.

A dub is not an enormous quantity of marijuana. In fact, it may be roughly the size of two large nuggets of cannabis. Broken up, it is roughly enough for several blunts or five or so joints.

Eighth of Bud | ⅛ of marijuana

Ah, the eighth. This is where you really start to get some serious bang for your buck. It’s a little bit cheaper compared to the per gram price of a dub, but an eighth allows you to get a lot more for a better price. Let’s take a look at the eighth weighs and prices below.

How many grams are in an eighth of an ounce?

So, by definition, an eighth has 3.5 grams of cannabis in it. This unit of measurement is a little bit less ambiguous than the others that we looked at for the simple fact that no matter where you find yourself in the world 3.5 is one eight of 8. Make sense?

But you will find that many of the best legal dispensaries offer 4 gram eighths to incensive buying in bulk compared to buying per gram.

How much is an eighth?

Again, it depends on the state, the town, the dispensary. However, the general cost of an eight falls somewhere in the $25-35 range.

As you can see, it’s a good way to save some money as opposed to buying by the gram. Buying three grams separately at somewhere between $15-20 will cost you a lot more than buying an eighth at a time.

Yep, more slang. The mathematical name for this increment of cannabis is offset by some nicknames that make it a little bit less formal.

Regionally, there are countless other slang ways to refer to the eighth such as half a quarter, slice, eify and cut.

There aren’t really any hard and fast rules for this stuff. If the other person understands what you are trying to say, everything is copacetic.

As we move onto the ever larger amounts of kush, we have the quarter. A bulkier bag, this is going to be suitable for those with a big habit, those that like to save money by buying in bulk, and of course, those that just really like their marijuana. Let’s take a peek.

How many grams are in a quarter ounce?

So, an ounce is twenty-eight grams. That means that a one-quarter of an ounce is a total of seven grams.

Again, for context, that means we are looking at roughly ten blunts or twelve to fifteen joints. And of course, if you like to smoke out of glassware or bongs, the amount of use you get will really be subjective to how you pack your bowls.

How much is a quarter?

As always there is no single price that you can expect to encounter. More a range. In this case, we are talking about a range of $50-70, depending both on where you get the cannabis, and the quality.

Private reserve weed or marijuana with higher potency will come in closer to seventy, whereas more midshelf or lower top shelf cannabis will be a little bit more affordable.

The quarter has one mainstream nickname in the cannabis world, a quad (two-eighths). Regionally, there may be (and in fact most definitely are) a variety of different terms people use for this measurement.

Again, the colloquial rule applies: if people know what you mean, that’s what counts.

Half Ounce or Half a Zip | ½ of Marijuana

Now we are moving up to the big boys and moving into the territory of fairly substantial increments of cannabis. Half an ounce should last for a while, or at least give you a weekend worth remembering that you’ll probably forget.

How many grams are in a half ounce?

The half-ounce comes in at exactly fourteen grams. That’s twenty to twenty-eight blunts, and thirty or more joints (depending of course on how you roll).

In short, if you smoke around one gram of bud or less a day, a half ounce will last you around two-three weeks.

How much is a half-ounce?

You can get yourself half an ounce of cannabis for around $100-120 on average. This puts the price per gram at between $7-10—roughly half what you would pay if you bought them one at a time.

What slang terms are used for a half ounce?

There are a few slang terms for the large quantity of weed. Most commonly, you might hear a half ounce bag being referred to as half-O, half an O or, half a zip.

And now we’ve made it to the full ounce! In many parts of the country, this is more or less the end of the road for legal bud. In California, and many legal states, the legal maximum amount of marijuana an individual is able to own at a given time is one ounce.

They enforce this law, because they believe anyone owning over one ounce of marijuana has the intent to distribute. So keep your stash under an ounce, and you should have no problem staying safe in legal states.

How many grams in an ounce or zip?

There are twenty-eight grams in an ounce. That’s 28-56 blunts, or close to one hundred joints.

How much is an ounce of bud?

The price of an ounce can vary pretty substantially based on quality.

The most common term that you will hear for an ounce is “a zip”. As in “I’d like a zip.” You might also hear an ounce referred to as “O Zone,” or a Lid.

Finally, the quarter pound. Not for beginners, this sizable amount should tide over even the biggest smokers for a long period of time.

Fair warning, most places prohibit owning increments of cannabis at this quantity. In fact, in some parts of the country, owning 1/4th a pound of marijuana is still considered a serious criminal offense.

How many ounces and grams are in a Quarter Pound / QP?

There are four ounces in a quarter pound, which comes out to a total of ninety-six grams. That will give you about 60-100 blunts, or 200+ joints. In other words, it’s lots and lots (and lots) of marijuana.

How much is a QP?

It’s not always easy to even find a retail option for a quarter pound, so the price can depend on quite a few factors.

You can get a QP for around $800 in Colorado, but other places, where cannabis isn’t so abundant the number can be significantly higher.

Check out our hotel partners to book a 420-friendly hotel during your stay in Colorado!