How To: Do Dabs

It may be old news for MANY of you, but for just as many doing dabs is something totally different than the norm. Whether you’ve never tried em, or you’re an expert – this video will entertain, no doubt.

Bobby Black from High Times Magazine lays it all out for the newbs. It is as easy as Scoop, Heat, Inhale, Clean 🙂

2. Heat (nail with torch until it almost glows).

3. Inhale (smoothly as you touch your prepared dab to the hot nail).

Follow along with the video and watch a serious professional do his job. Button up shirts are boring gifts. They just are. Instead, pick from the seemingly unlimited choices when shopping for cannabis-inspired clothing. You name it and someone, somewhere, had made it with a pot leaf or two on it. Undies? Check. Adult footie pajamas? Check! This T-shirt from 6DollarShirts.com presents a valid point, and for the canna-enthusiast who is also a cat lover this shirt by Rip N Dip covers both bases adorably. I don’t know about you, but my main man has what might be a hundred keys. He has house keys and car keys and work keys, oh my. Helping him dress up his key ring, a staple of his every day, can be a cute reminder of how much he is loved. Enter the Sweet Leaf Key by Good Worth & Co, which is a small but flashy choice for a house key. Another option could be this handmade key chain with cut-out coin by Bongo Beads. You could even choose to leave the weed leaf out of it and express your thoughts with words using this offering from Rasta Empire that simply reads: Legalize It.

Maybe your guy is new to cannabis or maybe he is an old hand in the game. Whatever the case — starting a collection or adding to an existing one — a new pipe or vaporizer will be a sight for sore eyes. One kit I found on EverydaySmoker.com includes a grinder, a lighter and (one of my personal favorite styles of pipe) a steamroller. This would dazzle even the seasoned smoker. I mean, how many steamrollers have you smoked out of? Alternatively, if you have a little more cash and would prefer to vaporize, I’ve heard good things about the Pax 2 for its sleek style and the Herbalizer, which is designed by former NASA engineers. Both are high quality and discreet. Though I’ve yet to try either, I know my guy would be psyched if I surprised him with one of these.

4. Help him build his library, one cannabis publication at a time.

When my husband was growing up he got a monthly subscription to skateboard magazines. The anticipation is half the fun — checking the mailbox each day for the next issue. Nowadays, we tend to dread the mailbox filled with junk flyers and bills. But we wouldn’t if we had a monthly HT subscription. With grow tips, photo spreads and interviews, a monthly ’scrip for this classic mag won’t disappoint.

Republished with permission from the author. 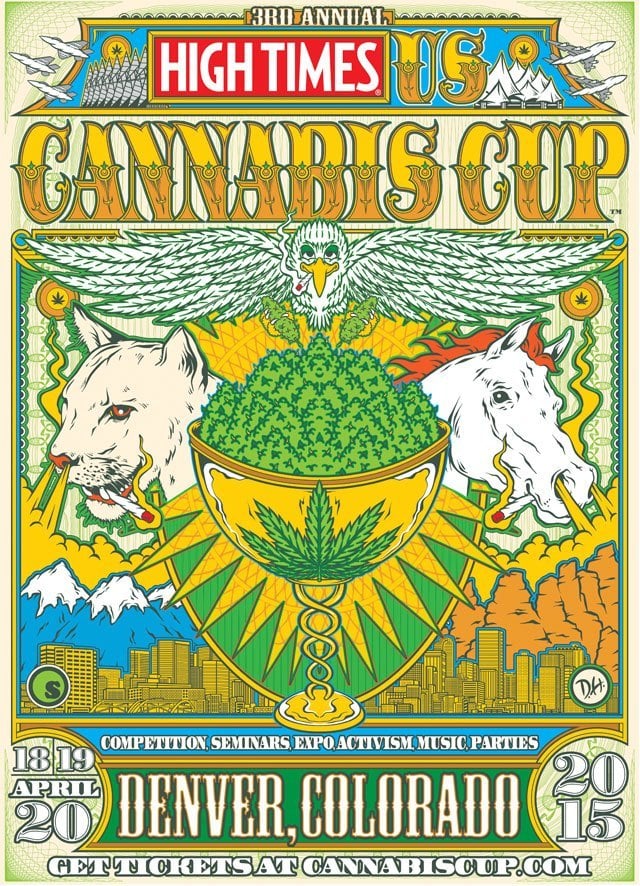 Join Colorado Cannabis Tours for the Biggest 420 Party in America

Last year’s High Times U.S. Cannabis Cup marked a historic moment in cannabis culture, celebrating the legalization of recreational sales and adult use in the state. The 2014 Cannabis Cup brought a record breaking number of enthusiasts to the Mile High City, soundly defeating any previous attendance figures for the legendary High Times event. And the 2015 Cup, running from April 18th to the 20th, promises to be bigger and badder than ever.

Founded in 1988, the High Times Cannabis Cup is the world’s premier marijuana festival, a multi-day spectacle dedicated to sampling, sharing, and judging some of the world’s finest cannabis creations. This year’s event at the Denver Mart will feature over 700 vendors, ranging from licensed dispensaries, to gourmet edibles companies and creators of handcrafted glassware. Judges will be on hand to asses the best offerings in a variety of categories, including Best Glass, Best Edibles, and Best U.S. Indica and Sativa.

This year’s event has been expanded to three full days at the Denver Mart, featuring special performances by SOJA, Nas, J-Boog, and Snoop Dogg. Outside the official roster of Cannabis Cup activities, local venues and business have an equally impressive schedule of activities planned to mark the occasion. The 420 in the Streets concert will include performances by Method Man and Redman, Cypress Hill, and Collie Buddz. To make the most of this remarkable event, Colorado Cannabis Tours is offering visitors access to all the amenities necessary to plan the ultimate weed-centric vacation, including exclusive deals on 420 friendly accommodations, complimentary vaporizers, and a special Cannabis Cup edition of Denver’s most comprehensive marijuana tour – featuring a surprise appearance by a very special celebrity guest. Colorado Cannabis Tours has teamed up with a diverse selection of marijuana friendly lodgings, allowing visitors to easily book accommodations along with their daily tours and activities. Be forewarned though: Cannabis Cup is expected to attract an unprecedented crowd this year. Book early if you don’t want to miss out on the true Mile High experience.

For more information on Hotel Bookings for Cannabis Cup or call +1-303-420-TOUR (8687). Hurry Hotels are selling out quickly!