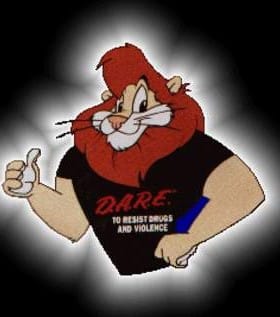 Did It Really Keep Kids Off Drugs?

When and Why It Was Created.

If you went to school in the United States from the 80s on, chances are you took a course through D.A.R.E. program. D.A.R.E., which stands for Drug Abuse Resistance Education program, began in 1983 with the intention of providing alternative support and prevention education to children to lessen their risk of using drugs, experiencing violence and/or being involved in gang activity.

A major perceived catalyst of the program was the untimely death in the mid eighties of prominent college basketball star, 22-year-old Len Bias. Bias, a player from the University of Maryland, was at the very top of his game and had just been the No. 2 overall pick of the NBA Draft (NUMBER 2!). Bias was set to be making his way to the Boston Celtics. At the time, Celtics scout Ed Badger told the press,

“Len Bias is the closest thing to Michael Jordan to come out in a long time…He’s an explosive and exciting kind of player like that.”

The stage was set for Bias’ unlimited success. But just two short days later and Bias was dead, having passed away a few hours after using cocaine at an early hours party.

ESPN writer Rick Weinberg put it perfectly for his readers,

“The shock of the day’s events do not subside. Not in that moment. Not for years.”

Though Weinberg was correct, he likely didn’t realize that it was more than just the sports community that was affected by Bias’ death.

A War on Drugs had begun. And the shock and awe of that event has still has not subsided. In fact, the war continues. Today, D.A.R.E. program has been integrated into 75% of schools in the U.S. and reaches 52 countries total.

The number one objective of the program is in the name – drug abuse resistance. Cocaine, and later crack, were the big news drugs in the 80’s. After Ronald Reagan’s Anti-Drug Abuse Act was signed in ‘86, D.A.R.E had the government sanctioned foothold it needed to stay relevant in the school system, indefinitely.

The original intent of the program was not to scare children, but instead to give them the education they would need in order to make a wise decision when drugs or alcohol did cross their path. By showing children what other choices they had, and that they had the power to make those choices, D.A.R.E. program coordinators were aiming to give kids a better life, one free of drugs and violence.

When the D.A.R.E. program began, information was imparted to youth by police officers. Utilizing the police force as instructors for the program is a tactic that is still used today. Sure, a student can listen to their usual teacher talk to them about drugs and violence, but when a uniformed police officer steps into their mundane classroom, badge shiny and handcuffs jingling at their side – the classroom attention perks up.

Children often want to please police officers, in part because, in many instances, they are taught to revere and fear them. Heck, some parents even use local police as a scare tactic when disciplining their kids, much to the distress of the officers hoping to build trust in the community. So it would seem as though using police officers to teach D.A.R.E. was beneficial regarding gaining student’s attention but maybe not so much in the way of allowing children to open up, ask questions and feel comfortable admitting mistakes.

Was it effective? Is it still in schools?

The effectiveness of D.A.R.E. is a difficult thing to measure. Yes, in the 90’s after the program had been initiated, youth polls began to show a decrease in use of marijuana, methamphetamines, LSD and cocaine. However, one could speculate that with a brand new program in place in many classrooms, one that condemns the aforementioned substances, perhaps the children charged with taking these surveys were more guarded and therefore less likely to be honest and admit their use then they had been previous to the D.A.R.E. program.

D.A.R.E. is still in schools today, being taught alongside the literary classics and sex education. It is a very normal, expected part of the school year for students. And while it’s effectiveness, or ineffectiveness, has not prompted any big changes in the program in the last several decades – times ARE a-changing now and an overhaul regarding the use of marijuana may well be in order.

What do you think about the D.A.R.E. program. Do you have any memories of being taught drug abuse resistance education? Let us know in the comments below.