In Cosmic Cannabis Culture Part 1 we talked about the most ancient origins of where and how cannabis emerged into existence.

In Part 2, we will go deep into what the ancient Vedic texts say about cannabis.

Keep in mind, as we learn about the ancient origins of cannabis, this story is presented in a very abstract manner. The abstract story, holds hidden within it, a more GRAND underlying metaphor.

As we continue our journey, on the quest for knowledge and the truth, we’ll seemingly always be on the path of finding, and uncovering, another layer of the truth.

Let’s begin, unfolding, the deepest known layers, about the origins of cannabis culture.

In the following image, is a grand story being told. This is the ancient Vedic story about Mount Mandara and what occurred surrounding the times. 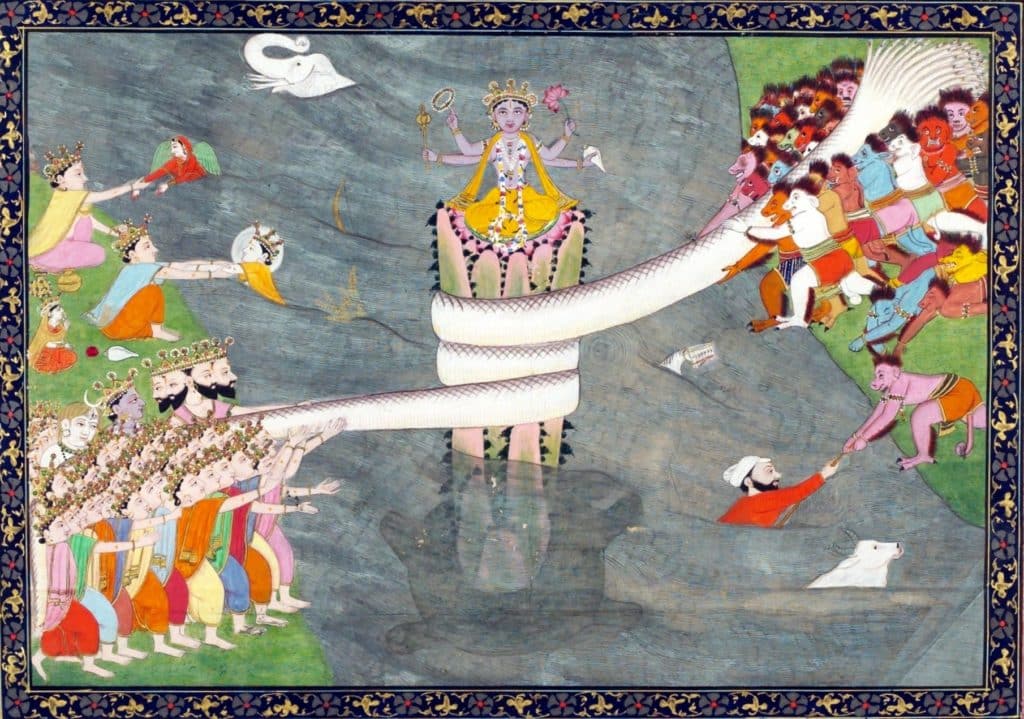 The verse, from the Vedas we read above, tell the story about what’s going on in this image. The symbols go deep and are packed dense with information and ancient wisdom.

Let’s see if we can decode some of the deeper implications.

While there are a lot of “specific” gods, displayed in this story, we’ll focus on a few of the most significant gods and different “classes” of gods.

It is well known, back in ancient times, that hemp was an important staple of everyday life. Hemp was used as medicines and as mind altering chemicals used in rituals that facilitated an experiential link to the gods.

Hemp was also, at one time, known as the “flesh” of the Gods.

Vasuki, is the Serpent King. Seen in the image above, Vasuki is depicted as the giant snake, being pulled by the gods, from either side of the river. Vasuki, originally, offered himself to serve as the rope, in which to “stir” the Heavenly Oceans.  He was being pulled, on one side, by the Asuras (demons), and the side, by Devas (gods).

The Devas (gods) and Asuras (demons), at one point, decided it was in the best interest of everyone involved, to form an alliance and work together, for a specific purpose. Once the alliance was formed, the Asuras and the Devas worked, together, for a millennium. For an entire millennium they worked to “churn” the heavenly ocean.

Their combined purpose, in churning the heavenly oceans, was to release, from the universe, Amrita, the original nectar of immortal life.

As demons, being demons, they demanded to hold the head of the snake, Vasuki.

There wasn’t much of a fight from the gods, to allow the Asuras (demons) to hold the head of Vasuki because, the God Vishnu (God of Preservation and Protection), gave the Devas (gods) advice to hold Vasuki’s tail.

Vishnu gave the Asuras good advice, in holding Vasuki’s tail. What ended up, as a result, from the Devas, holding the head of the snake, ended with them demons being poisoned by the fumes being emitted by Vasuki.

2.2) What Are The Heavenly Oceans?

Simply put, the Heavenly Ocean Of Milk is the Milky Way Galaxy (The galaxy in which we live) as depicted as a white spiral cloud.

The metaphor here is that all life, good and evil, combined their forces to “stir” immortal/eternal life, from the cosmos.

The gods and demons are stirring the “cosmos” looking to discover immortality. To stir simply means to mix together, that which hasn’t been before, mixed together. Combining one thing to another.

The “theory” is that if you mix enough things together, you will eventually discover what you’re looking for. According to the story, the demons and the gods had to “stir” for a millennium before they discovered immortality.

The “image” of what they are stirring is of the rotating spiral galaxy structure, of the Milky Way, correlating with the Ocean Of Milk, being churned.

Mount Mandara is the Supermassive Black hole that is located at the center of the Milky Way Galaxy. Mount Mandara can be understood to be an incredible force, both gods and demons, were attempting to control and manipulate, in which to complete their quest to discovering immortality.

The image of the supermassive black hole represents just how extremely “heavy” Mount Mandara is.

In essence, “The weight of the project”, was quite massive.

Even the name, Mount Mandara, is used in modern cosmology as an ancient reference to the supermassive black hole that holds our Milky Way Galaxy together.

2.5) What Specifically Is At The Peak of Mount Mandara?

For the churning pole they used the peak of Mount Mandara.

The force was so great the mountain began to sink into the Ocean Of Milk.

As the mountain sank, Vishnu (God of Preservation and Protection), took the form of the great Tortoise Kurma, and bore the weight of the mountain on the shell of his back.

What is symbolized, in the metaphor at this point, is the tortoise is a representation of longevity. More specifically, in this story, it symbolized the protection and preservation of the attainment of the goal of discovering immortality, aka, longevity.

Standby for part three, of the epic journey, into the rediscovery, of the origins of the cannabis sativa plant.