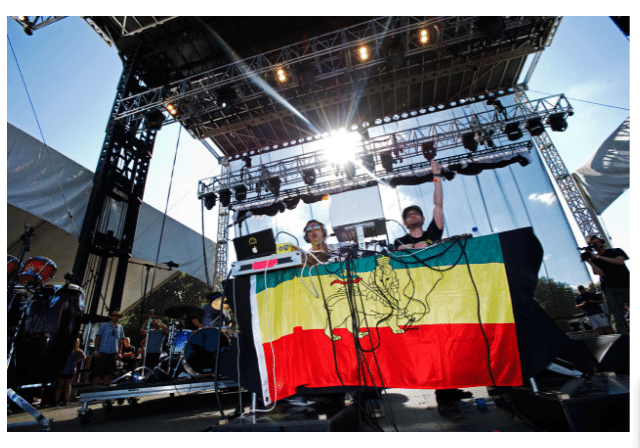 Lance Herbstrong — the 420-friendly party band consisting of producer and percussionist Kamal Soliman, guitarist Peter DiStefano, and engineer Bill Sarver — has been making a name for itself when it comes to creating amazing mash-ups and original tunes. The band, which has collaborated with some amazing folks from Blues Traveler’s John Popper to Karl Denson, Umphrey’s McGee and more, having recently found themselves making their intro to the movie business. You’ll be able to catch Lance Herbstrong performing an original song, featuring Big Daddy Kane, in the upcoming stoner flick, Ripped!

In addition to making some magic, the band is working on their fourth album. Fans can download Lance Herbstrong’s first three albums (The Knobturner’s Guild, Meth Breakfast, Tokelahoma) for free on the band’s website. Currently on tour with canna-preneur and reggae luminary Damian Marley, Lance Herbstrong’s Kamal Soliman took some time to answer some of our burning questions:

Who has been your favorite guest artist to sit in with you?

There have been so many. We are blessed to be a small band that has had some serious heavy hitter guests sit in with us. But, of all of them, I would say Perry Farrell meant the most to me personally because it was Perry, first with Jane’s Addiction and then with Porno For Pyros, that inspired me to pursue a career in live music. And, it was the remixing of the song “Orgasm,” that resulted in Pete becoming our guitar player. So when Perry finally sat in with us at the Lollapalooza artist after party and sang our version of “Orgasm” with us, it was a culmination of all I had been trying to put together. But, having Lance Armstrong sit in with us at the Austin Reggae Festival was pretty damn cool as well.

Can you share a favorite story or two from performing a backstage or industry party?

I was tour managing Thievery Corporation at the time and we were doing a co-headlining tour with Massive Attack. We had done four shows already and both bands were still feeling each other out and unsure of how to interact with one another. We had just come off two shows in NYC and had a day off in Miami. Lance Herbstrong was booked to play a show in the lobby of the hotel that Thievery was staying in. I believe it was the Eden Roc. The hotel had erroneously advertised our show as a Thievery show and the promoter in Miami was flipping out. Normally, the Thieves would sit in with us, as they have before, but since this was billed erroneously and the promoter for the real show was livid about it, none of the Thieves could sit in and there was a weird tension in the air. But once the show started, the vibes were right and the Massive Attack band were there getting drunk for the first time with the Thieves, enjoying our music. It was the beginning of a very fun and memorable tour we had together. That was the night everyone truly connected and became friends. The guys from Massive all jumped in with us and I will never forget Robert Del Naja banging cymbals and tambourines while we jammed out to the bitter end. We all ended up hanging out until the sun came up and were beyond hurting the next day. But as a result of our little party in the hotel, the real show had the largest walk-up sales in Bayfront Amphitheater history, selling about 2k tickets. It was a great end to a lot of undue drama, caused by the promoter’s fear of our show cannibalizing ticket sales to the real event. Legendary night. 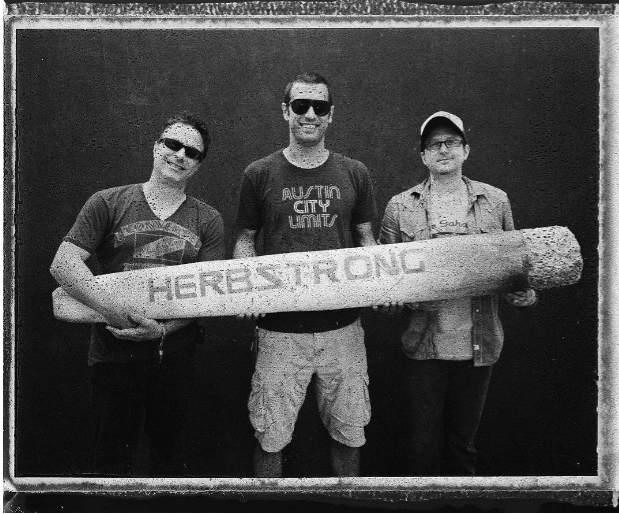 Typically, I’ll choose a song to be remixed or songs to be mashed up and discuss with Bill Sarver. The key to what makes Lance Herbstrong work so well is the synergy between my instincts and Bill’s engineering genius. Sometimes Bill will question if the mashup can work, but 90 percent of the time I trust my ear and keep pushing him to get it right. Eventually, he will, after hours of changing keys on a certain song or pitch shifting another, etc. By the time Bill sends me the first pass to listen to, the skeleton of the song is already in place and from there we fine tune it back and forth a few more times before sending it to Pete to record his guitar parts. When we receive Pete’s guitar, we go back and forth a few more times with the guitar layered in until I’ve listened to the song probably 1000 times and can say it’s done. Then, we send it off for mastering.

How did you get involved with writing a song for Ripped?

I received a text from a friend one day, Midi Soliz, who’s a badass fashion designer and wardrobe producer for film and TV, saying, ‘Hey, I’m working on a stoner film that wants a band to film a scene in the movie. You interested?’ Yes. We spoke to Brad Epstein (the director) after that and were onboard. Brad says, ‘I know Big Daddy Kane. We should get him onboard, too.’ Sure. Next thing I know, Kane and I are speaking about recording his vocals.

How does cannabis factor into your creative process?

Cannabis plays a big part in the creative process. I think it’s safe to say that it plays a big part in most artist’s creative process. It allows you to see or hear things from a different perspective, to find an appreciation for something you may not have recognized before, to enjoy something a bit more thoroughly. Without cannabis, I may have never found the motivation to spearhead this mission we call Lance Herbstrong. As I get older, I use it less in large crowds and more in private settings, as it really causes my mind to go off and running. Oftentimes, I prefer to be alone or with close friends when smoking it.

Favorite strain to smoke while (before?) performing?

I rarely smoke before the show. I’ll get too introspective and nervous and over think the show. We always have pre-show jitters. Pete still gets them after 30 years of performing live. I think the moment you stop getting them is the day you should hang up your performance career, as it may mean you don’t care enough about it as you should. So, for that reason, I rarely smoke before the show. Although, once the show is in motion and the vibes are right, I like to light a few joints on stage and share them with the crowd. I generally prefer strains that get you up and moving versus mellow and lethargic.

Here’s another good industry story about one of our shows…

We did this show at SXSW one year for the ad agency GSD&M. The stage was in a parking garage that was at the back of the corporate lawn where the party was being held. While we were on stage playing our show, a one-armed homeless man from the streets of Austin wandered into the parking garage and made his way on stage. We looked over and saw this one-armed man playing our congas, and it couldn’t have been a funnier moment. We just let him have at it for a few songs. Famous people, friends, the audience, or even the one armed homeless are welcome onstage at a Lance Herbstrong show.