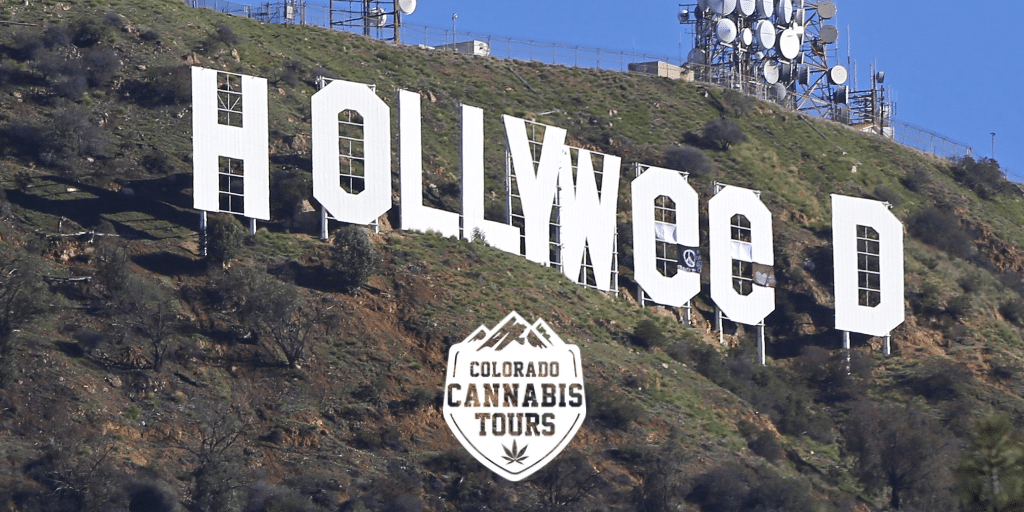 Sometime around midnight, on the eve of the New Year, a group of pranksters decided it was a good idea to upgrade the look of a historical landmark.

This historical HOLLYWOOD sign had the two OO’s replaced with two EE’s to read HOLLYWEED.

When I first saw the photo being passed around social media, I initially thought it was a good job of Photoshop doing its job. Most people I talked to thought it was fake until we saw CBS showing a live feed of them repairing it. Nice.

The Hollywood sign was originally put up, in 1923, to encourage the increase of the sale of homes to develop the area. The sign originally stood 30 feet high and read HOLLYWOOD LAND and was only suppose to be up for 18 months.

Since the spawn of this sign, it was clear that this wasn’t going to be a temporary sign. 18 months, turned into 94 years and on the eve of the 94th year standing, at its modernized 45 feet tall, the proud stoner community decided it was about time to increase the visual appeal.

These particular upgrades could be seen as an act of vandalism or in the EXTREME “conservative” perspective, an act of terrorism. We are still technically federally at war with this plant.

As I write this, I’m trying to look into the mind of the Director of the DEA and imagine how they view this situation. Since we are at war with cannabis, would they compare this act as if the pranksters were hanging up an ISIS flag? EXTREME?! Most definitely. However. What’s extreme is being at war with a plant since 1971, thanks President Nixon. We’ve been federally at war with weed for 46 years. And. Weed has been in federal prohibition going on 80 years now. Damn! What a pathetic and embarrassing shame to be at war with an enemy that hasn’t hurt anyone.

Others, me, look at this situation as a heroic act of bravery. Our proud cannabis community stood up to the “man” and decided it was high time to display an appreciative message to the world that cannabis is now recreationally legal in the great state of California!!!

These people who did this are not vandals, or terrorists. These wonderful people are HEROES and they wholeheartedly deserve a MEDAL of high honors! Whether or not they officially receive a medal from our community, the world, at least, will stand in awe and enjoy this wonderful art installation for as long as it existed. Around ten hours. Not bad.

Interesting fact. This wasn’t the first time the HOLLYWOOD sign was altered to read HOLLYWEED.

The first time the HOLLYWOOD sign was altered to read HOLLYWEED was January 1, 1976.

No matter how you choose to look at what happened to the HOLLYWOOD sign, the truth is, this has got to be one of the most tasteful pranks the world has enjoy, so far.

Usually the story of New Year’s Eve partying involves people getting blackout drunk and destroying things. Thankfully, hearing stories about stoners getting high and breaking things, are VERY rare, if actually in existence at all.

While you might initially think the HOLLYWOOD sign could have been damaged with this prank, it really wasn’t. Nothing was moved or changed or altered in any way. How they were able to pull this stunt off was with strategically placed cloth that made the O’s look like E’s.

Displayed over these pieces of black cloth, had symbols of peace and love.

If you happen to take more than a quick glance at this display, you’ll notice something very interesting. As you enlarge the photo and zoom in all the way, to the altered letter O’s, you’ll notice that, on top of the black cloth are symbols. The one symbol is your classic and popular peace symbol and the other symbol is a picture of a heart. Very nice classic touch to really drive home the message of what the cannabis community is all about. Which even further adds to what our community’s intentions truly involve.

We are not here to cause damage or destruction, break law of violate anyone or anything. No. We the people, of the cannabis community, are here to bring a message. Our message is a simple message. A simple message of peace and love and the desire to spread and share the love with all who have the eye to see and the ears to hear, the true message of what is really being communicated on this historic day of restoration. The message that is being displayed by this wonderful piece of art touches at the very core of society. As the law goes into effect to make cannabis legal for recreational use, it goes on to mean something much deeper than what our knee jerk chuckle response is. The message is one of hope, one of love and one of a desire to restore peace and prosperity to our great nation. We are not just a bunch of silly stoners looking to get a few cheap laughs. No. Not even close.

We are a community that cares about the survival and protection of the health, wealth, safety and happiness of the people of planet Earth. And. With Hollywood being such a powerful center point of attraction to some very powerful people who connect the world, through the mass media, via entertainment. The “pranksters” chose a very appropriate avenue to unleash the message to the world. The right things are being done and restoration is happening and no force on Earth can suppress the truth and the light from being show and displayed.

Very smart choices were made in keeping the sign functional and intact, with no damage. Otherwise this situation could have been investigated for more than just a simple act of misdemeanor trespassing.

Which that is what is actually currently under investigation, via security cameras at the sign.

The sign was downgraded back to reading HOLLYWOOD the following day at 10:45 am.

With the sign altered to display the word WEED for as long as it did, there was quite a disruption throughout the community. Social media had a quite a fun time displaying endless selfie after selfie. Most notable selfie I saw was Steve-O from the classic Jack Ass tv shows. His caption read, “I don’t know who did this to the Hollywood Sign, but I’m quite impressed they got away with it.”

One small step for man, one giant leap for the high kind.