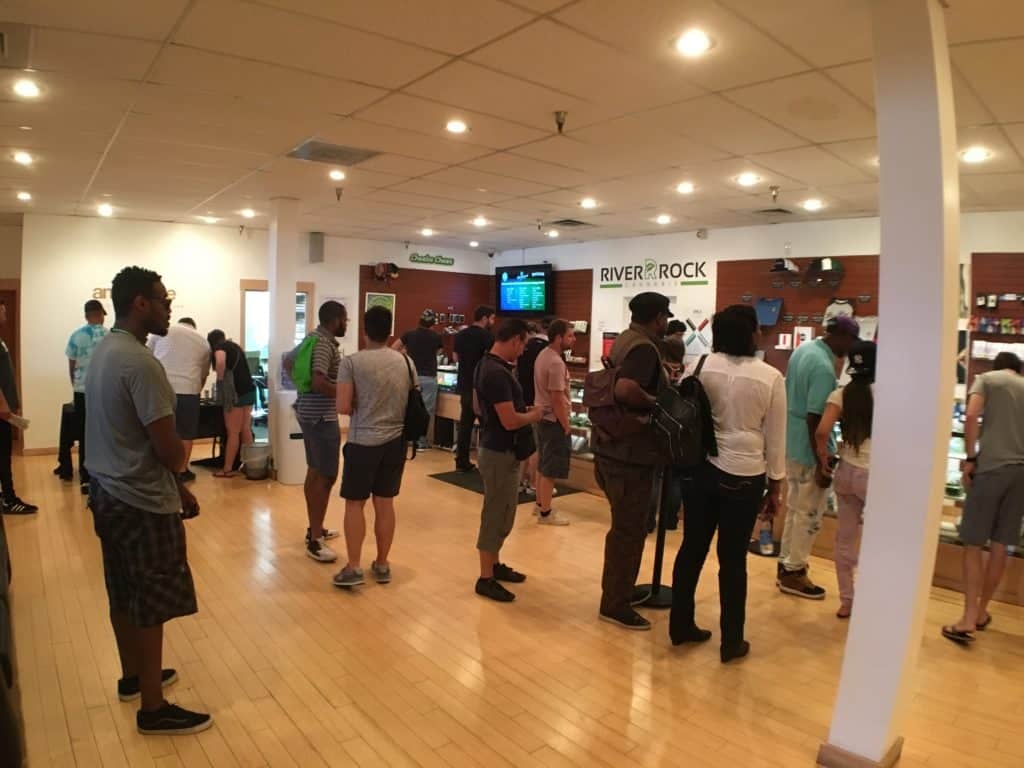 Editor’s note: Have you ever wondered how the states differ in dispensary visits? This blog is a “how to” that describes the dispensary process in legalized states. We will update this list as more states legalize recreational marijuana.

Every dispensary has its own company policy regarding workers or customers handling the product. Some dispensaries allow you to inspect the buds you’re shopping with tongs and/or under a magnifier. Other dispensaries have a jar on the counter but only sell pre-packed nugs of that strain, rather than straight out of the jar. And while you can’t exactly TOUCH the buds yourself in any scenario, you can get pretty up close and personal with the marijuana before you purchase it.

Consumption while on site at a dispensary is NOT allowed in Colorado. Consumption in any public place is illegal. Colorado cannabis users are lucky though because while “public” use is out the door at the moment, the laws aren’t super clear – which leaves room for a lot of grey area. Cannabis events can advertise as private, sell tickets in advance thereby limiting entry so it isn’t open to the public. This method has been working for everyone so far and barring any raucous or violent incidents taking place at such an event (which hasn’t happened yet) it will continue to work for the foreseeable future.

Don’t even try it. Maybe you can drink water from a water bottle while you’re in the waiting room, but don’t think of chowing down or popping a brewsky.

Generally, cannabis facilities are going to need to be 1,000 ft from any K-12 school. Not that anyone K-12 could get INTO one of these facilities, because to be allowed inside a person is carded and must be 21 or older… Education media outlet, Chalkbeat, covered the zoning requirements and discovered an interesting bit,

“State law recommends a 1,000-foot buffer between medical marijuana facilities and schools, drug rehabilitation centers and child care centers. But the law allowed local authorities to set their own rules.

So Colorado Springs, for example, allows marijuana facilities within 400 feet of schools while Denver has several closer than 1,000 feet. Those facilities have been allowed to continue operating because they opened before the state law was enacted.”

Denver is getting its chance to legalize social use once and for all. Take a long hard look at Initiative 300 (also known as The Neighborhood-Supported Cannabis Consumption Pilot Program Initiative) and vote YES on 300 in November if you are a Denver resident!

The inspection process in Washington is a fairly limited one. At Main Street Marijuana in Vancouver, Washington, customers are presented with a list of available strains and products that day. There is absolutely no green on the sales floor to look at or smell before purchase. The customer selects their strain and amount desired and a Main Street Marijuana employee retrieves your pre-packed order from a secured area and you’ve got your stash.

ALL cannabis in Washington is pre-packaged, right after it has been tested and approved for consumption by a lab. Testing helps prevent product containing mold, pesticides or other hazardous contaminants from circulating into the community. Only the best for Washingtonians!

Initiative 502, the measure the legalized recreational cannabis in Washington, did not however, legalize on-site consumption. No dispensary can allow a client, patient or otherwise, to consume cannabis on their property. The laws regarding actual consumption are similar to Colorado’s – you can only smoke it if you are not in “view of the general public.”

Licensed marijuana shops can only sell marijuana and marijuana infused products, as far as consumables go. And no other type of business, like a head shop or convenience store, will be able to apply for a license to sell pot within their current business.

It is also an option for cities, town and/or counties in the State of Washington to relegate marijuana businesses to a specified area or zone or ban them altogether!

If you are a data nerd (I am! I am!) check out this informative, weekly report  the Washington State Liquor and Cannabis Board puts out. It’s got info on licensing, locations, production, sales and compliance for cannabis businesses within the state.

The Cannabist reported on the unique, not so uptight way recreational dispensaries in Oregon handle check-in,

“Oregon dispensaries won’t be taking names as they do with registered medical marijuana patients, but they must record the customer’s birthdate and information about products purchased.”

Measure 91 legalized cannabis for recreational use but,

“Public consumption is still prohibited under law.  Licensure for a cannabis café allowing public use would require a statutory change.  Also, cannabis falls under the regulation of Oregon’s Clean Air Act in 2016.”

Just like Washington and Colorado, Oregon does not allow in dispensary consumption – or any type of public consumption for that matter. Anyone surprised? All use of cannabis or cannabis products must take place out of view of the public.

There is one exception though! If you are an employee of the dispensary and a registered medical patient you CAN consume on property. However,

“it is important to note that as of March 1, 2016, an employee may not smoke or use a system that includes combusting, inhaling, vaporizing, or aerosolizing.”

So I guess that leaves…drinking cannabis, sublinguals (under the tongue method) or edibles, patches and topicals. It isn’t a joint on your lunch break, but it is some kind of bone thrown at the medical patients working in the cannabis industry.

According to the Oregon Health Authority, dispensaries in Oregon follow the 1,000 foot rule when it comes to K-12 schools (or another dispensary). If a dispensary is opened within 1000 feet of a primary or secondary school, or within that proximity to another licensed dispensary the police are going to shut that down as soon as they catch wind of it.

Very recently a dispensary in Portland was robbed. No one was hurt, because no one was there, but at least four of the robbers were reportedly wielding handguns. Read more over at The Oregonian (Live).